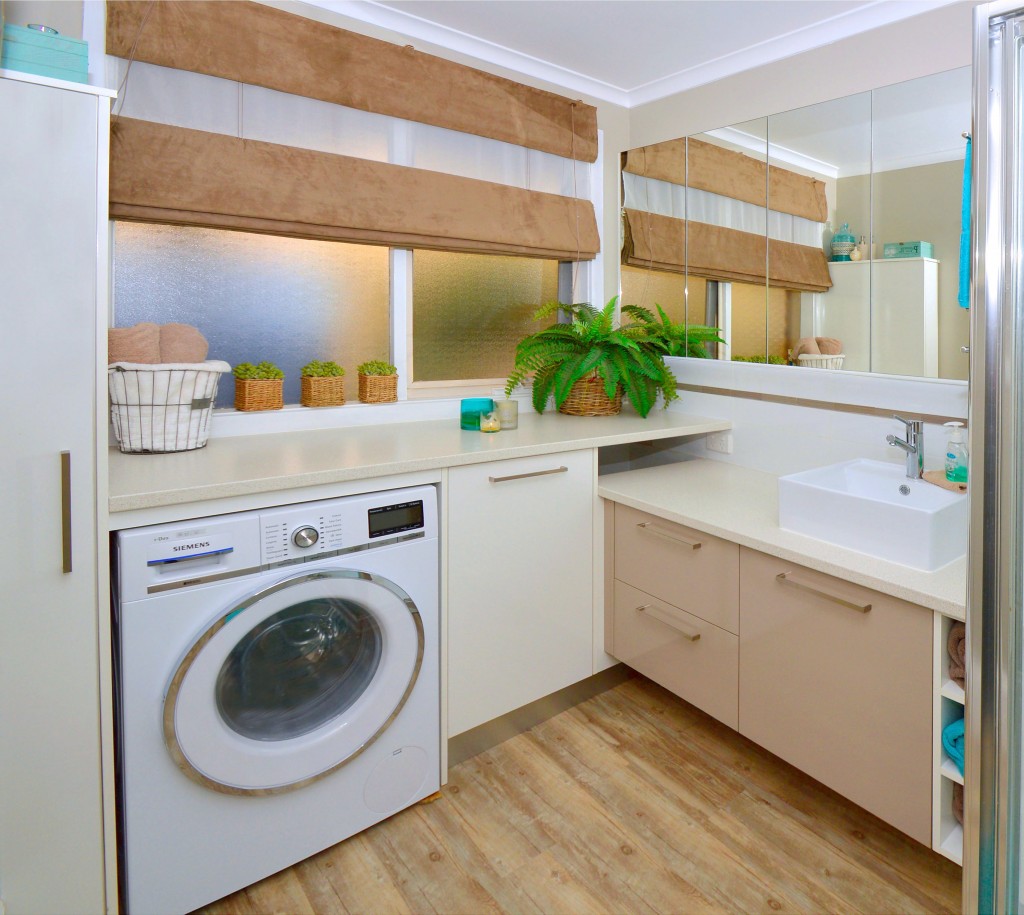 When Vicki Dreier of Dreier by Design purchased this ‘80s house 18 months ago, the plan was always to renovate. After a fire in the kitchen, it was time to embark on a major renovation for a kitchen, bathroom and laundry. The most important priorities in this project were to make it as eco-friendly as possible and to make the kitchen a much larger, functional space.

After completing her design, Vicki contracted Hilltop Constructions to ensure that a wall that was to be removed between the kitchen and laundry was not structural. The main aim was to secure more space for the kitchen (which will be featured in the next edition of Melbourne Kitchen + Bathroom Design.)

Vicki compromised by having the laundry created within the bathroom. After listing everything that needed to be accommodated for a functional bathroom/laundry, she designed the space to house her new Siemens washing machine, with a 5-star water rating, 4-star energy rating and i-Dos intelligent dosage technology. Vicki designed a split-level bench to provide a laundry chute, utilising what would have otherwise been a dead corner.

The Think Wise LED lighting strip around three sides of the shaving cabinet provides the energy-efficiency that Vicki was looking for and gives a chic hotel feel to the room. 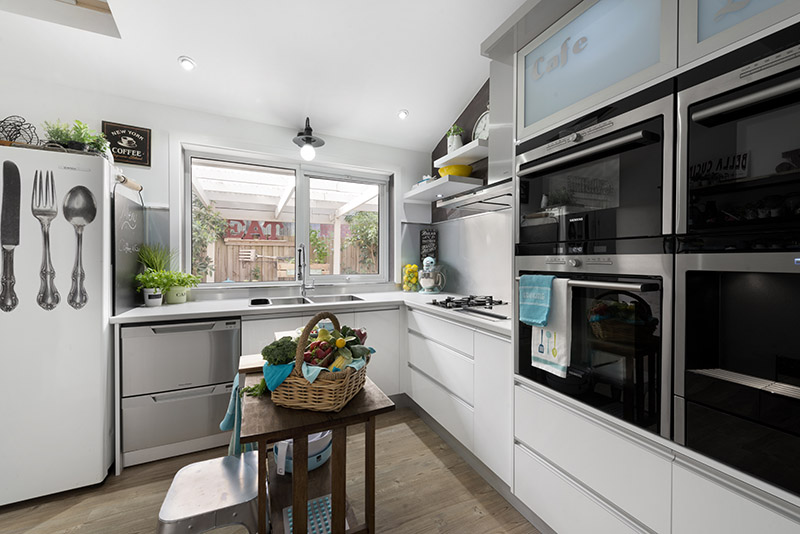 When Vicki Dreier of Dreier by Design set about renovating this kitchen, her aim was to create a user-friendly design within a modern setting, maximising space and minimising energy consumption. The aesthetic was to be modern industrial-style, with a few quirky twists to give the space personality.

Vicki approached a builder with her drawings as she needed to remove a wall and relocate the laundry (which was featured in the previous edition of Melbourne Kitchen + Bathroom Design).

Removing the standard ceiling and following the rake of the roof enabled Vicki to accommodate a ventilative Fakro window to help let in the daylight and allow the heat to be released in the hot summer months. With the ceiling removed, Vicki designed a bulkhead to house the heating ducts that run through to the other areas of the house.

Keeping in mind the eco-friendly aims of the renovation, the next target was the kitchen window. After extensive research, Vicki selected a PVC double-glazed Weatherall window with a retractable flyscreen.

While the integrated Siemens appliances add that ‘wow’ factor and give the kitchen a streamlined appearance, the Laminex Metaline brushed aluminium splashback adds to the modern industrial look, giving the impression of stainless steel, with the added advantage of being easy to keep clean and streak-free.

Amtico vinyl plank flooring in ‘Dry Cedar’ ties the look together, complementing the timber-look wallpapered feature wall and the rustic industrial dresser at one end of the room, which has been styled with decorative but functional S&P pieces.

To see the total transformation of this kitchen, go to the Dreier by Design website to see all of the ‘before’ and ‘after’ photos. If you’re thinking of renovating and need help with a kitchen or bathroom design or layout, contact Dreier by Design.